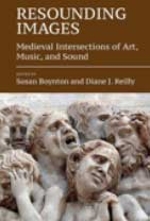 This study brings together for the first time scholars of Christian, Islamic and Jewish art and music to reconstruct the complex intersection between art, architecture and sound in the medieval world. Case studies explore how ambient and programmatic sound, including chant and speech, and its opposite, silence, interacted with objects and the built environment to create the multisensory experiences that characterized medieval life.

While sound is probably the most difficult component of the past to reconstruct, it was also the most pervasive, whether planned or unplanned, instrumental or vocal, occasional or ambient. Acoustics were central to the perception of performance; images in liturgical manuscripts were embedded in a context of song and ritual actions; and architecture provided both visual and spatial frameworks for music and sound. Resounding Images brings together specialists in the history of art, architecture, and music to explore the manifold roles of sound in the experience of medieval art. Moving beyond the field of musical iconography, the contributors reconsider the relationship between sound, space and image in the long Middle Ages.