Nowhere in the Middle Ages 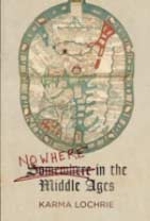 Literary and cultural historians typically cite Thomas More's 1516Utopiaas the source of both a genre and a concept. Karma Lochrie rejects this origin myth of utopianism along with the assumption that people in the Middle Ages were incapable of such thinking.

Drawing on a range of contemporary scholarship on utopianism and a broad premodern archive, Lochrie charts variant utopian strains in medieval literature and philosophy that diverge from More's work and at the same time plot uncanny connections with it. Examining works such as Macrobius's fifth-century Commentary on the Dream of Scipio,Mandeville's Travels, and William Langland's Piers Plowman, she finds evidence of a number of utopian drives, including the rejection of European centrality, a desire for more egalitarian politics, and a rethinking of the division between animals and humans.Nowhere in the Middle Agesinsists on the relevance and transformative potential of medieval utopias for More's work and positions the sixteenth-century text as one alternative in a broader historical phenomenon of utopian thinking. Tracing medieval utopianisms forward in literary history to reveal their influences on early modern and modern literature and philosophy, Lochrie demonstrates that looking backward, we might extend future horizons of utopian thinking. In Nowhere in the Middle Ages, Lochrie reframes the terms of the discussion by revealing how utopian thought was, in fact, "somewhere" in the Middle Ages. In the process, she transforms conventional readings of More's Utopia and challenges the very practice of literary history today.