Charlemagne and his Legend in Early Spanish Literature and Historiography 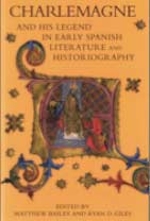 The historical point of departure for this volume is Charlemagne's ill-fated incursion into Spain in 778. After an unsuccessful siege of Zaragoza, the king of the Franks directed his army north and on his passage through the Pyrenees, he turned his wrath on Pamplona, destroying the Basque city and its walls. The Basques subsequently ambushed the rearguard of Charlemagne's army on the heights of Pyrenees, killing numerous officers of the palace, plundering the baggage, and then vanishing into the forested hills, leaving the Franks to grieve without the satisfaction of revenge. In Spain, popular narratives eventually diverted their attention away from the Franks to the Spaniards responsible for their slaughter.

This volume explores those legendary narratives of the Spaniards who defeated Charlemagne's army and the larger textual and cultural context of his presence in Spain, from before their careful elaboration in Latin and vernacular chronicles into the early modern period. It shares with previous studies a focus on the narration of historical and imaginary events across genres, but is unique in its emphasis on the reception and evolution of the legendary figure of Charlemagne in Spain. Overall, its purpose is to address the diversity and importance of the Carolingian legends in the literary, historical, and imaginative spheres during the Middle Ages, Renaissance, and into the seventeenth century.

Ryan Giles with Matthew Bailey, Charlemagne and his Legend in Early Spanish Literature and Historiography (Boydell and Brewer, 2016)